Constituted in at Camp Syracuse , New York, the regiment fought in the Great War , and was later inactivated in During the Cold War , the regiment saw multiple activations and inactivations, with service both in the Regular Army and the Army Reserve ; it fought in Vietnam. Ultimately it was reactivated as a training regiment, and as of , it has been assigned to Fort Benning and consists of two active battalions.

Still in North Africa, along with the rest of the 9th Division, the regiment fought in the Battle of El Guettar , which resulted in a significant number of casualties; [27] for actions during the battle, the regiment's commander, received the Distinguished Service Cross he would later go on to be promoted to be the assistant division commander of the 77th Division. Smythe became the regiment's commander. Remaining in Sicily after the Axis forces retreated, the regiment received orders to move in November , making its way to England ; [29] with the rest of the 9th Infantry Division, the regiment trained until June Assigned to VII Corps , it was allocated to the liberation of the Cotentin Peninsula , being the division that sealed off the peninsula to prevent additional German reinforcements from breaking through.

The city fell to the Allies by the next day; following the liberation of the port city, along with the 60th Infantry Regiment , the 47th fought the remaining German forces in Cap de la Hague , ultimately capturing over 6, Germans by 1 July. On 14 September, the regiment entered Germany, at or near, Roetgen ; [45] it was the first German city to fall to the Allies. Schmidt to act as the regiment's commanding officer, only to be succeeded by Colonel Peter O. 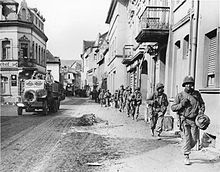